They recently made an official developer PDF walkthrough in the downloads. It tells you the solution to each panel & ending with images. It would beat any itch.io comment made here.

If anyone can't get the 2nd ending, you just have to keep clicking the red button.

how do i do this

i somehow now have the holy mary as a sticker now. i have no idea what im doing.

how do you get the 4th ending?

whats dont do it pad

I love everything about this game. Well done.

Reply
Something1 year ago

To get the 7th ending id don't know the exact combination for the color panel but just start from red, yellow, blue and green keep doing this over and over and you'll get it eventually

To get the 10th ending press the red button until the roman pop up, do 213121 then flip the lever on the left. enter on the panel that just popped: 1066. the on the thing that looks like a lot of buttons do

at the last row you want to put the red on the 2nd square and the other at the 6th square.

at the first row you want to put one square on the very middle.

at the third row you want to put one red on the first square and another on the last square.

To get the 8th ending keep pressing the red button until a hammer pops up on the left. then get the hammer and drag it to the screen.

To get the 1st ending first press the button until the roman numerals pop up, from there enter 213121. Then, flip the lever on the right and enter on the binary keypad :101101. btw thanks everyone in the comments I just took the information in the comments.

btw if anyone needs help the roman numeralls are 213121

nvm i did not wait long enough for ending one

It won't open what do I do

So the mobile one is just a guide? oh edit: just found out that the download button is on top of what you want I'm dumb its the game

I got all the endings for the first time :D

If anyone has questions i finished it. im willing to help! and to anyone reading this have a amazing day :)

i got stuck on the switch (aka the thing that comes up when you press the button once) what do i do?

anyone know the number?

nvm got it lol im dumb

howd you get there

its putting 3748 in the keypad (flip the switch to right)

What's the code for the roman numerals? I can't find what it is

I dont get it

do get destroy all humanz ending you need to use the top two buttons on don't do it panel the code is as follows: left, right, left, right , right, left. 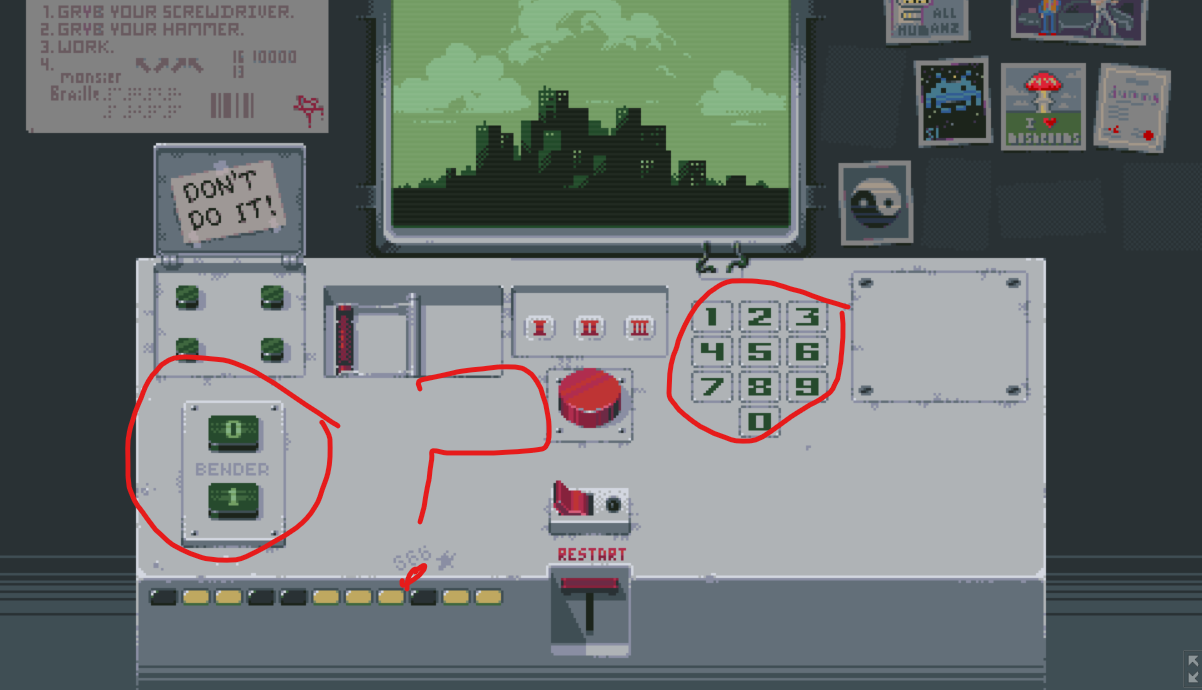 How did you solve the roman numerals puzzle?

Oh thanks, I figured it out, but thanks.

i got em all, without watching a tutorial!

how do you  use the screwdrive

in the screw holes